skip to main | skip to sidebar

The Mapuche people have been oppressed by the governments of Argentina and Chile since the military occupation of its territory in the 19th century. The "Desert Campaign" as the Argentine army called it, was actually a genocide and dispossession of Mapuche and Tehuelche people. However, the existence of these natives dating back thousands of years ago, before the creation of the Argentine and Chilean states.

The lands appropriated by the argentinian state were sold or given to large landowners including Benetton, one of the richest people in the world. Currently, Benetton is the continuity of the dispossession of the indigenous peoples. Benetton manipulates justice, police forces and the media, to ensure the oppression of native peoples.

Benetton declares that makes clothes for humans beings...
Ey Benetton! What is the color of oppression? 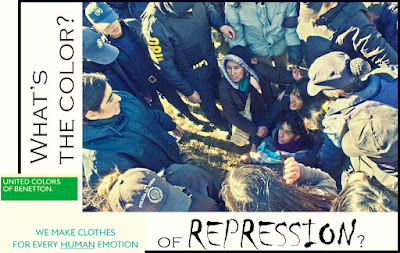 
The Autonomous Mapuche Movement of Puel Mapu (MAP) has recovered ancestral lands usurped by Benetton in Chubut province (Argentina) and Mapuche people throughout the territory are emerging and claiming their rights over Wall Mapu (Mapuche Nation).

In response, this illicit conglomerate of landowners, media and repressive forces commanded by Benetton and the Argentine government has arrested the "Lonco" (head of the community) Facundo Jones Huala, who is in prison just for defending the rights of the Mapuche people.

The Lonco is a Mapuche authority. Keep Jones Huala arrested as a political prisoner is a serious affront to all the Mapuche culture. From prison, the Lonco Facundo Huala Jones called for a fair trial process. Moreover, he urged the states of Argentina and Chile to dialogue seriously, recognizing the political conflict with the Mapuche people. Finally, he called for the intervention of the United Nations (UN) to ensure that the rights established in the UN Declaration on the Rights of Indigenous Peoples are respected. 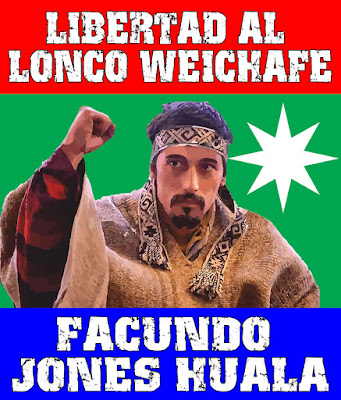 1- Recovery of the whole Ancestral Territory: productive and sacred lands

3- Enforce our territorial and political rights

5- Resistance against oil companies, mining companies hydropower companies and any firm that attempt against Mapuche territory and life

6- Rebuilding of the Mapuche cosmovision